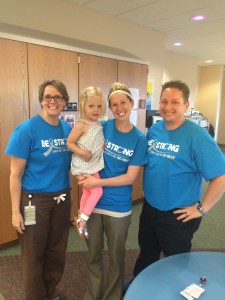 Emma with some of her favorite nurses. Thanks for supporting #EmmaStrong

This post is very long over due. We’ve been meaning to write this since right after the Drive for a Cure at the end of May, but somehow time has just gotten away from us. So bear with us, this could be a long post! 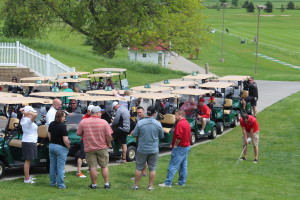 A look at the golfers ready to raise some money.

First, we have to say a huge thank you to everyone who either took part in the EmmaStrong Drive for a Cure or served as a sponsor. We are so incredible thankful to everyone who helped to make the day so successful. We had a beautiful day and 112 golfers that played this year. After the tournament we had our first silent auction at the tournament, and are so thankful to everyone who donated items as well as those who purchased items. We are especially grateful to our event sponsor: Union Bank Columbus, Ag Loan Office, as well as our grey level sponsors: Pediatric Therapy Center-Papillion and McHugh Iron Metal-Norfolk, our dinner sponsor: Hy-Vee-Papillion, and dessert sponsor: Costco-Omaha. Because of these sponsors, our hole sponsors, and everyone who took part in the tournament we were able to raise $16,000 dollars to donate to pediatric brain tumor research. We are so humbled by all of the support we have received to make this possible Thank you for joining us in this fight! 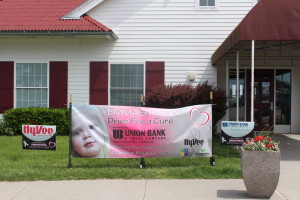 The new banner for this year. Emma looks pretty good.

Emma turned three in May. It is a day that we celebrated and thanked God for having the opportunity to celebrate with her. When I think about all she has endured in her short life, I am in awe of how strong she is. She fights everyday to learn things other kids learn automatically. At times it hurts to think of what things could be like for her and what she would be doing if it wasn’t for the tumor. We try not to let those thoughts creep in too often, and instead try to focus on the progress she has made. She is so incredibly tough. We are so thankful our happy, spunky, sassy three year old who has taught us more about life and living life to the fullest in her short three years than we learned before her. 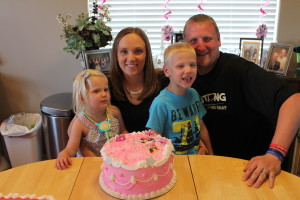 You want to wear your “boom boom” in the family picture?? Its your world we are just living in it.

This is the first summer we have had in quite some time that hasn’t had huge issues with hospital stays, so we have been trying to squeeze as much fun and family time as we can into this summer. We have been having lots of fun going to the zoo, the pool and Mahoney, as well as other fun day activities close to home. Emma really enjoys going swimming and her favorite part is going down the slides. She also loves going to the zoo, it is probably her favorite thing to do. We also managed to squeeze a quick trip to Colorado in over the 4th of July. We spent a few days in Denver and then some very kind friends let us stay at their cabin in Winter Park for a few days. We had a great time just enjoying the scenery, going down the alpine slides at Winter Park, and relaxing at the cabin. It was great to finally take a vacation that didn’t revolve around doctor’s appointments. 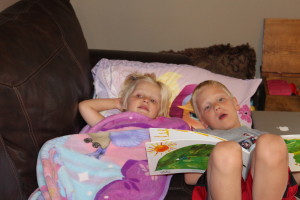 Aiden does such a good job taking care of his sister.

I’m sure many of you are wondering how Emma is doing with this new treatment since we haven’t posted much since we started. For the most part she is doing pretty well with it. Her counts were very low two weeks after the oral meds in the first cycle. Her ANC was zero, which meant we had to be extremely careful in where we took her so she wasn’t exposed to any viruses. She did pretty well with both doses of Vincristine, which is the drug the push through her port two weeks and four weeks after oral meds. In true Emma fashion when we were ready to start the second cycle her ANC was only 950, and it needs to be 1000 to start oral meds. After some discussion the doctors decided to go ahead and start the chemo since it was close. We survived the second round of giving Emma oral meds every 6 hours for four days. We weren’t quite as nervous getting them prepared this time, and Emma did alright taking them. She is so tough. She seemed to be a little more nauseous this time and it took her a few days to bounce back to her normal self after taking the oral meds this time. We took her in to the hospital Friday and she had another dose of Vincristine and her ANC was 750 this time, so that is at least not awful. Emma has also continued to work hard and go to therapy twice a week this summer. She is talking more and more all of the time, and has made some nice progress on her walking with her walker. 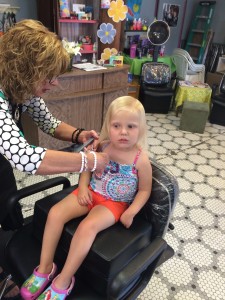 Emma getting her hair trimmed.

We had a follow-up appointment at Madonna and the doctor there would like to do Botox in her left leg to hopefully increase her range of motion. We also had a follow-up with her eye doctor. He feels that her left eye is still drifting some and that she is near sighted. He also feels that she probably has a field of vision deficit which is a result of the tumor. It is so disheartening that her eyes were doing so well after Botox last summer and since surgery we have lost that progression and haven’t been able to gain it back. Dr. Legge recommended glasses to help with the near sightedness and eye drift, so Miss Emma now has glasses. She isn’t a big fan of the them, but we are working on gradually getting her more comfortable with them. 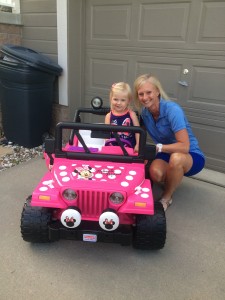 Emma got to have her Make-A-Wish send off party and had this surprise waiting for her at home.

We have been lucky to have avoided the ER for several months, but Emma thought she would give us a little scare this weekend. Sunday afternoon we were at Walmart and she wanted out of the cart and started complaining that her stomach hurt. She continued to whine and cry the whole way home. When we got home she was screaming and saying her tummy hurt. Then she threw up. This is always worrisome to us because it can be a sign that her shunt isn’t working or that the tumor is causing problems. It could also be from chemo, but she was screaming in pain so we didn’t think it was that. While we were on the phone with the doctor she threw up two more times and continued to scream in pain. The doctor said to call 911 and have her brought in. The Fire Department in Papillion did an amazing job with her. Thankfully shortly after they arrived she quit throwing up. They took Emma to Children’s ER where several they drew blood, took a urine sample and did a shunt series. They determined from x-rays during the shunt series that she was severely constipated likely from all of the different drugs she is on. Constipation is a constant battle for her with all of her different meds. They also believe she may have a urinary tract infection as her urine sample wasn’t clean. So they had to put a catheter in to get a clean sample, but we are still waiting on those results.  They gave her a dose of meds to hopefully loosen things up, but as of tonight we are still having issues. They called in a new drug, so hopefully that will help. Thank you to everyone for their prayers yesterday as we unsure of what was going on and it has been quite sometime since Emma has worried us this much with unexplained pain. We appreciate you prayers and support more than you know. 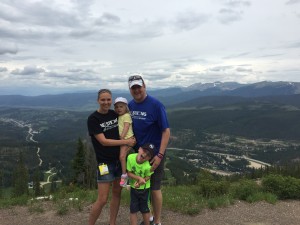 Family vacation to Colorado. Thanks to the Kosters for sharing their cabin for a couple nights. It was awesome.

June was a hard month for us as two of our fellow brain tumor families in Nebraska lost their children to this awful disease. It is a very hard reminder to us that you never know how this journey will go and that we can’t take any day for granted. One of the little warriors who lost her courageous battle was 8 year old Gigi Carrera of Lincoln. You can follow her story on Facebook at Team Gigi-Walk by Faith not by Sight. She was an amazing young lady that lit up every room she walked into and lived life with a zest that we all should. We ask you to say prayers for her family as they try make step forwards without their beautiful daughter. Stories like hers are the reason we must keep fighting. We have to keep raising awareness and funding so that we can find a cure these kids!

Join Emma and family at her run coming up in Kearney.

If you are around the Kearney area this weekend some good friends of ours are putting on the 3rd Fun 5k run/walk for Emma at Yanney Park at 10:00 a.m. This years theme is pirates and princesses so come on out for the 5K and help us raise money to help find a cure. We will also be at the Uplifting Athletes 5K and one mile fun run in Lincoln Sunday morning helping to raise awareness and funding. If you are looking for some good races for a great cause check these out. 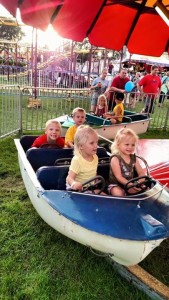 Having some fun with the Bombecks at Papillion Days

We will end this post with some good news and something we are greatly looking forward to. Make-A-Wish has granted Emma her wish to go see Minnie Mouse. Last week we had her send off party at Texas Road House in Papillion. We enjoyed a great meal with our wish granters. We want to say a special thanks to Jani-King, The King of Clean for sponsoring Emma’s wish. The entire staff at Texas Roadhouse were awesome and gave a very moving presentation in front of the whole restaurant. Make-A-Wish spoiled the kids with all sorts of presents. Then as we were leaving they said they had one more surprise for us when we got home. When we pulled up at home there was a bright pink Minnie Mouse Power Wheels Jeep sitting outside the house just for Emma. She was so incredibly excited and just loves it! We leave for Orlando next Monday for our trip to Florida where we will get to visit Disney, Universal, Sea World and stay at Give Kids the World. We are so incredibly excited for the trip. We can’t even imagine what the kids will say. Emma keeps telling everyone she is going to see Mickey and Minnie. We have our fingers crossed that she healthy and feeling better by the time we leave. We can’t thank Jani-King and Make-A-Wish for this incredible gift that they are giving our family!

Thank you to all of you for all of your continued prayers and support! EmmaStrong!!