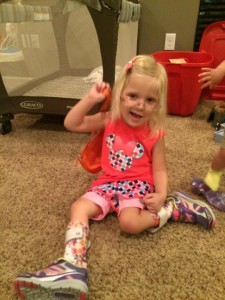 Emma has a new favorite purse at daycare!

I wish I had better news to share with you all tonight, but unfortunately Emma was admitted to the hospital tonight. Our little Emma has had a rough couple of weeks. It is kind of long story, but I’m going to try and keep it short tonight.

Emma has been fighting a cold and pretty bad cough for over two weeks now. No matter what we have done, we just haven’t been able to help her cough get better. We started breathing treatments last Thursday, and even that hasn’t been helping much.

Emma’s blood counts have been all over the place for about a week and a half. Emma went in on October 15th because she had lots of bruises and her counts showed that her platelets were low, so we did a platelet transfusion that day. We have been into clinic about every three days since then checking counts, and we just can’t get them to turn around. After watching her counts for a week, Emma ended up having another platelet transfusion last Friday. We had hoped this would perk her up and finally get her counts headed in the right direction. I took her in again yesterday for counts and while her platelets were slightly better, her hemoglobin had dropped to 7.5 which is pretty low. They decided to send her home and they were going to have her come back again on Wednesday; however, Emma had other plans.

Emma was incredibly unhappy last night and didn’t get a very good night of sleep. We took her to school this morning, but shortly after getting there we had a call saying she had a 100.2 temperature. After hearing that we called in and the doctor decided Emma needed to be seen and have counts rechecked because her hemoglobin could have dropped more. The results of counts today were that her hemoglobin dropped to 6, which meant Emma would need a blood transfusion. Her platelets continue to be borderline and her ANC is only alright.

Emma was inconsolable all day today at clinic. After getting her transfusion, she had a low grade fever  and we had also noticed that Emma was taking very shallow breaths, so they took an oxygen level which was at 90 (should be 99-100). Emma also threw up a few times this afternoon. At this point it earned Emma an admission to the hospital. The doctors ordered a chest x-ray and started her on oxygen as well as IV antibiotics and fluids.

The radiologist hasn’t officially read her chest x-ray yet, but from what the doctors can tell she has pneumonia in her left lower lung. This explains why her oxygen level was low and she was having a hard time breathing. They have also ordered several other tests to determine if there is anything else going on, but we will have to wait a day or two for all of those results to come in.

The plan as of right now is to keep her at the hospital where she can be closely monitored. An illness like this can be very serious for someone with a compromised immune system and blood counts that are no where near stable. They are going to keep her on oxygen and try to wean her off over night if she can tolerate it. They will also continue antibiotics and breathing treatments to help treat this, as well as closely monitor her blood counts. I’m sure we will find out more about the plan tomorrow. 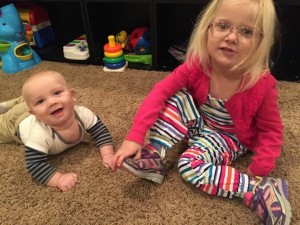 Emma loves playing with the little ones at daycare:)

We are supposed to fly out to Boston a week from today and do scans on November 4th, but who knows if that will be possible at this point. We will call Boston tomorrow to start deciding what needs to be done. Because Emma is so young, she has to be put under anesthesia for her MRI and they can’t do that if her lungs aren’t good. There is a good chance we will not be able to do scans in Boston next week, because Emma may not be able to travel or be healthy enough to scan. We will have to see what the next few days bring.

Emma feels pretty rotten. It has been a long time since I have seen her so sick and it just breaks my heart. She is so incredibly tough, but it is heartbreaking to watch her hurt so much. I pray that what they are doing helps her to be more comfortable and heal quickly. If you have a few minutes, we would sure take some extra prayers this week for Emma’s recovery. Thank you to all of our prayer warriors who lift us up during these difficult times!