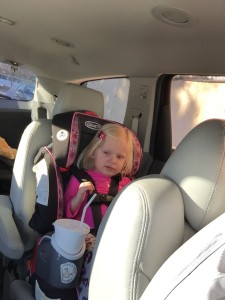 A day of new tests and experiences has come and gone yet again. Emma was an absolute trooper without being able to eat or drink until 1:00 p.m.  We are tired so we will get right to the results.

Emma had a bronchoscopy done, just like usual there were issues that they found while in there.  Most of the things they found were what we consider good things, because it showed reasons for the lung issues and hopefully eliminating a lot of the worry about the chemo causing the problems.

The first thing that the doctor asked when done is “does Emma snore when she sleeps?”  This is because there seems to be a lot going on in her mouth.  FYI that is not medical terminology but more Dad not remembering exactly what the doctor said.

Second item – the doctor commented on is that we shouldn’t be overly concerned about not getting results from the growth of what they took from her lungs.  His quote about this was “we were able to get quite a bit of specimen when sucking the fluid back out of the lungs.”

Third item – the doctor said that about halfway down the trachea there was a considerable amount of “gunk” that he is positive was causing her issues the past couple weeks.  This was the actual term he used not a medical term that Brent made up.  I will save all of you from having to look at the pictures of this, but trust me when I say it was a considerable amount of “gunk.”  I felt so bad for Emma when I saw this, because she actually sounds rather healthy right now so what did this look like the past three weeks?

Fourth item – When they got to the carina, where the trachea splits into the two lungs, the doctor noticed that the right side was considerably smaller than normal.  It was big enough to not be worrisome, but he commented that usually the left side is the smaller one.  Yet another thing that makes Emma unique.

Fifth item – Inside of the right lung the Dr. found that Emma has three upper lobes.  He mentioned that while this is strange, it shouldn’t prove to be that big of an issue.  He mentioned that this could be something that causes Emma to get sick more often though.  He also said that if this area proves to be a problem time and time again that they could possibly have to go in and fix this issue, but he said that would be unlikely.

Sixth item – the last thing that he commented about was the fact that because Emma has three upper lobes he was unable to get the probe to turn sharply enough to see the final upper lobe but things looked good.

The overall moral of the story is that Emma continues to challenge the medical field over and over by being unique.  While we found issues and things that were different, there wasn’t anything that was too worrisome.  Thank you so much for all of the prayers and it goes to show Emma has been fighting extremely hard the past few weeks and will continue to get better as we go along.