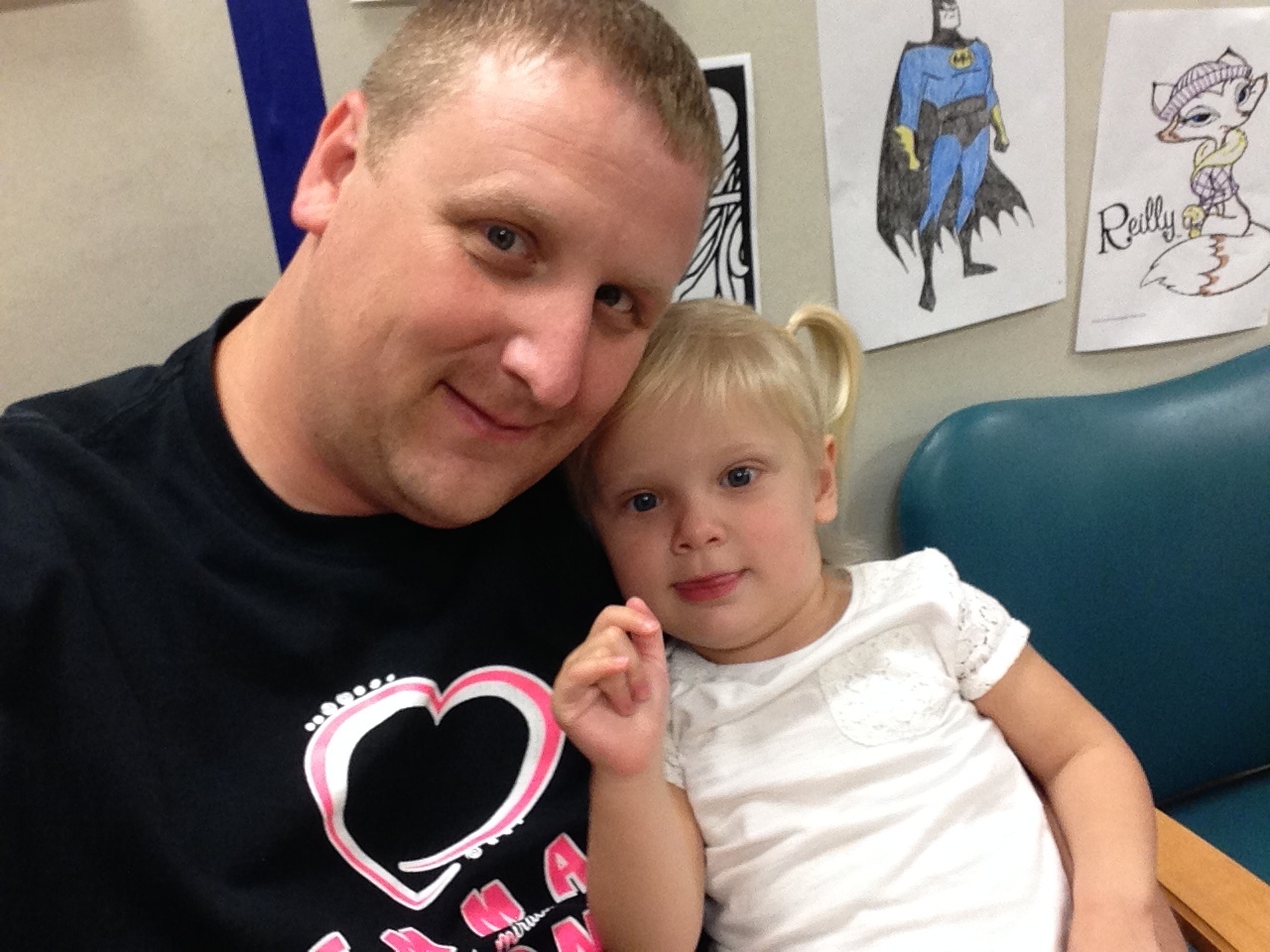 I’m not sure how to explain this, so I am going to resort back to how our posts were at the beginning of this journey.  An exact display of feelings and emotions that were experienced throughout the day.  So those of you that are not fans of feeling emotion consider yourself warned.

The day started with an appointment with Dr Ullrich, Emma’s Neurologist, at 8:30 this morning.  We were able to discuss everything that we have noticed about Emma throughout the past three months.  Describing habits, developments, challenges and surgeries we told Dr. Ullrich everything.  She eased our concerns about Emma’s difficulty getting up from lying down recently as well as how she lifts her right leg for no apparent reason.  The boot that Emma has been wearing due to the stress fracture in her left heel could possibly be too heavy for her and compensating for it may be hurting muscles in her right leg and abdomen area.  She felt that Emma seemed to be progressing nicely and was happy with what Emma was accomplishing despite her setbacks.  Great start to the day.

By 9:30 we were headed down to the MRI waiting room, we were actually going to be on time for the first time!  It had to be a good sign for things to come with the scans.  Emma’s port was accessed without much of a fuss from Emma and it flushed nicely right away.  It was a nice change based on the past couple times we had tried to use her old port.  It is still unbelievable how handy those things are compared to getting IV’s in the arms and pokes on the finger.

Emma was taken into the MRI around 11:30, since the scans take roughly an hour and a half to complete Mom and Dad decided to go grab a bite to eat at Bertucci’s.  This restaurant has quickly become one of the few highlights for our scan days in Boston, no wonder Jack spoke so highly of the place.  It wasn’t long after we got back from eating that we were informed Emma was done with the MRI and we could come see her in recovery.  She slept quite a bit longer coming off of the medicine today than in the past which left mom and dad anxious to say hi when she woke up.  Shortly after Emma woke up the Neurosurgeon walked in to reprogram her shunt, this would have been a lot easier had he gotten there when she was sleeping.

Because of Emma’s long cat nap we got to the JImmy Fund Clinic about 15 minutes late which we are quickly finding out is more common then being on time.  It was at this time that we finally got to talk to Dr. Chi about what they saw in the scans of the MRI.  Those of you who haven’t had to wait on health results for your children may not understand this, but to say that we were sitting in the office with a knot in our stomachs is a giant understatement.  As much as we try to live and operate entirely with faith that God is going to take care of Emma, I am constantly reminded that it is God’s will not ours that will be carried out.  It is exactly at times like this when you are sitting in the office waiting on results that test your faith.

Dr. Chi began the visit by asking about Emma.  How she has been acting, what she has been doing, and what we have been observing.  I knew at this point it wasn’t going to be the news that Kathryn and I have been praying so diligently for.  After about 15 to 20 minutes of discussing Emma, Dr. Chi informed us that the scans were as she put it "not good."  It looked to her at this point that Emma was probably going to be needing to find another new chemotherapy as well as needing a surgery in the near future.  So not only did we hear that all of the hard work that we have been putting in trying to get Emma comfortable with her new chemotherapy regimen was pointless, but we heard that she was going to have to go through the pain of surgery within the next month again.

I’m not going to lie at first I just sat in the chair and felt anger.  Angry that God wasn’t listening to what I have planned for Emma, angry that we as parents are unable to find and pick the chemotherapy that will keep this ——- tumor at bay, angry that the doctors can’t tell us what we are supposed to do, and most of all furious that Emma is the one that has to deal with it.  Why can’t it just be me instead.  The challenges and speed bumps that Emma keeps having to deal with is absolutely brutal, if I feel that we as parents need a break from this what can she possibly be thinking.

The details that Dr. Chi shared with us up to this point is that the tumor has grown by a centimeter in at least a couple different locations and that the amount of fluid in the ventricles is growing to a point that is dangerous for Emma’s future health.  Dr. Chi felt that the increase in tumor growth was causing the spinal fluid to stop flowing back and forth between the brain and the spine which will eventually cause so much pressure in Emma’s head to create headaches and eventually vomiting and inability to perform normal tasks.  Many of you right now are wondering "Why is the amount of fluid on the brain and issue? I thought Emma had a shunt."  Well you are correct and there is a chance that the shunt isn’t performing correctly but the fact that the fluid is accumulating and the tumor has grown tells them that it is probably a tumor issue rather then it being a shunt issue.

Because of the location of the fluid after the initial surgery Emma’s original shunt had to be placed in the subdural area of the brain.  The fluid in this location has decreased dramatically over the past year and we were aware that Emma would probably eventually need to have the shunt relocated into the ventricles of the brain.  While Dr. Goumnerova would be performing this surgery it is also being encouraged that they again go in and try to take the tumor that had grown back following the initial surgery.  Not only would doing this lower the amount of pressure that Emma is currently feeling in her head but it would also help eliminate some of the portions of stubborn tumor that continue to grow even though Emma is on chemo at this point.  By eliminated this part of the tumor, hopefully we will begin to see more success with the chemo that we move onto next.

What the next chemo will be is up in the air at this point, but we will be meeting with Dr. Chi and Dr. Goumnerova together on Friday to go over what we are doing next.  The reason for the second round of meetings is because tomorrow the Jimmy Fund Clinic holds a Brain Tumor Board meeting where all of the Oncologists and Neurosurgeons get together and look at scans of tumors that are still struggling.  While it sucks that Emma’s MRI will once again be under review at this board, it is one of the major reasons we are here in Boston.  Having an organized group of some of the worlds best Oncologists and Neurosurgeons looking at and diagnosing your daughters tumor does make us feel a little better.

One of the things that I said to both doctors was that Emma once again went roughly one month without chemotherapy since the last scans that she had.  Is this why there was so  much growth in the tumor or is it because the chemo wasn’t working?   There initial response was that there was quite a bit of growth that probably continued even when she was on the new regimen.

Kathryn did also ask a question that many of you will like to hear.  She asked Dr. Goumnerova if her plans for Emma have changed due to the difficulty that we are having finding a chemo that will work for our angel.  At the beginning of this Dr. told us that Emma’s type of tumor is usually very treatable and it is a matter of using different chemo throughout 20+ years to keep the tumor at bay.  Dr. Goumnerova responded very quickly that she is still working on Emma’s case with the expectation of getting her to see her 20th birthday.  This was very reassuring to hear that they aren’t giving up because we sure as heck aren’t.  We will still beat this tumor.  "Don’t give up, Never give up"

On a positive note because of the generosity of those that attended the EmmaStrong "Drive for a Cure" "Emma’s Fun 5K Run/Walk" and those that purchased EmmaStrong shirts in the past couple months. We were able to make a donation in the amount of $15,000 toward the development of a new surgical tool used during brain surgery that identifies healthy brain tissue as compared to tumor.  This could literally help save lives and we feel honored to be surrounded by such amazing friends, family, and friends we haven’t met yet.  God is good and we will find a way through this too.