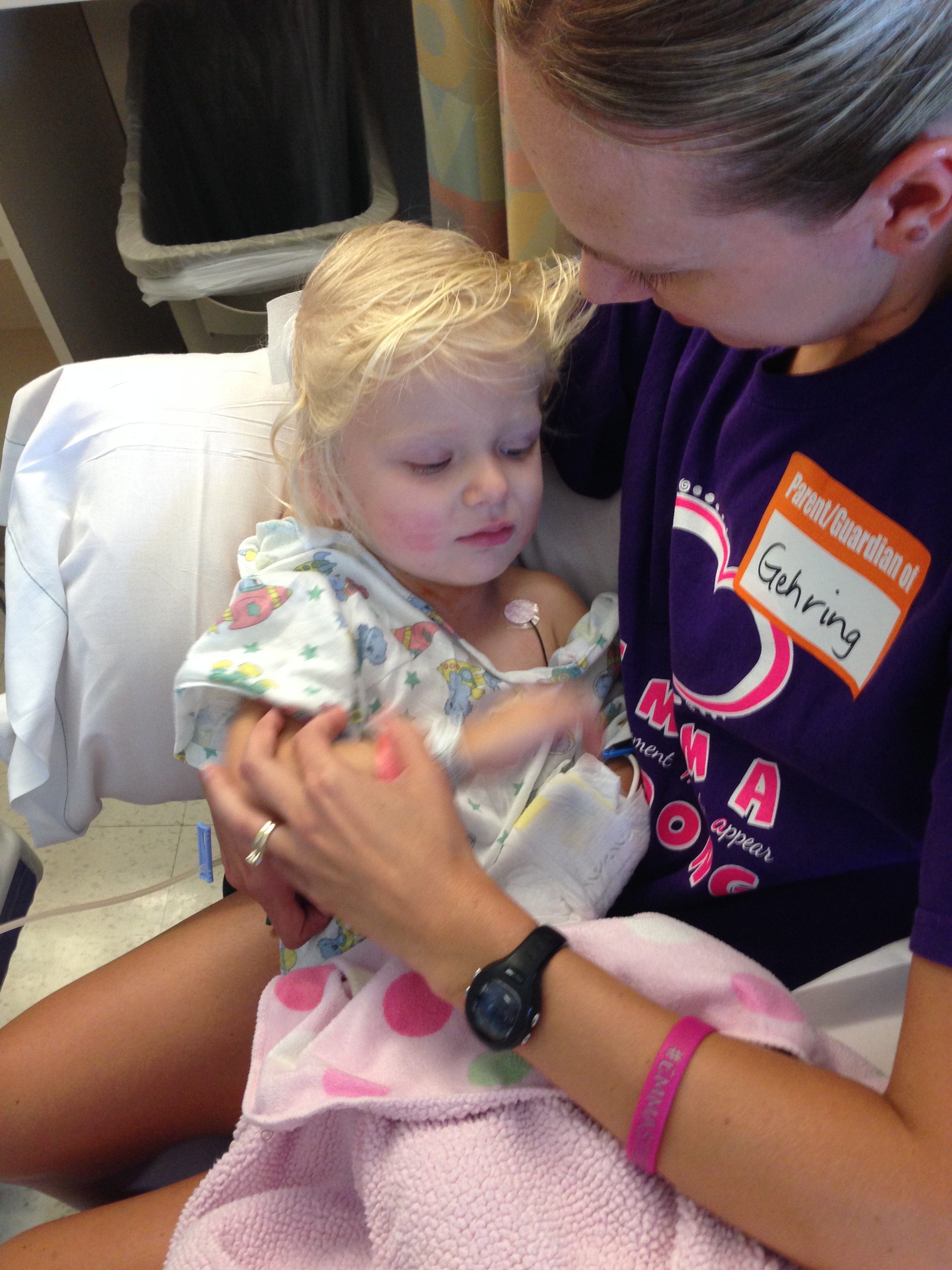 (Emma, post surgery waiting on the MRI to check the valve placement)

The Gehring’s can officially mark off another interesting week in the crazy journey.  With all the traveling and doctor’s appointments we have finally reached the downhill slide.  For the first time in a while, this post is being typed sitting in a hospital room.  Emma has been very lucky for roughly the last six months and has avoided spending the night in the hospital.  This run has sadly come to an end.

Emma’s day got started bright and early in Boston as we had to be checked in by 6:00 am (5 a.m. in NE) for a 7:30 am surgery.  She woke up fairly happy and ready to "Go", which was a big surprise after an evening of "DaDa", "MaMa", "PaPa," and "Owie" all night long.  Most of the wanting to go probably came from the two previous days that involved being out of the hotel very little since both times we left Emma decided to throw up all over the place (we assume this was because of the pressure from the fluid).

We knew on the way to the hospital that we wouldn’t have to wait too long to see Emma again since the surgery was scheduled for 90 minutes.  Anyone who even kind of knows Emma is not shocked at all by the fact that this isn’t exactly how it worked out.  We were informed by a nurse liason that Dr. Goumnerova had found the original subdural shunt to not be working anymore so she was going to need to replace that as well.  After somewhere around 2 1/2 hours of surgery, we finally got to meet with Dr. G and found out that she not only had to take out the old subdural valve, but also had to replace all of the tubing that ran from her head to her stomach.  When they were attempting to get the old shunt location to work she found that the tube wouldn’t allow any fluids through.  When they made an incision into her stomach they figured out that the tubing had kinked and wrapped around the bowel.  Kathryn and I at this point looked at each other and said no wonder she had been in so much pain, not only was she having headaches from the fluid pressure but her bowel was wrapped up by the tubing causing the discomfort that basically limited her to laying in bed the past two days.  Dr. Goumnerova said the pain that she felt from this was probably something similar to having appendicitis.  In true Emma fashion Dr. Goumnerova said that this condition was almost unheard of and that according to literature there had only been one or two cases where this had happened to someone else.

After a fairly lengthy discussion about this condition we found out that the amount of fluid in her ventricles was around 45-50 centiliters, the average is right around 20 centiliters.  I believe the quote from Dr. Goumnerova was something like "and that is quite a bit of fluid."  I can’t begin to imagine the headaches that she has been having the past couple weeks.  We had known something was wrong the way she was pointing at her ears and head for the past two months, but we just didn’t realize how much pain she must have been in and for such a long time.

Emma is now attempting to rest up in her room on the 9th floor, but you can see when her pain meds wear off because she struggles to stay asleep and moans about things hurting.  The doctors here a pretty special to our family, an example of their giving nature is when one of the neuro team Barb heard Emma going "dippy, dippy, dippy."  She walked in about 5 minutes later with a bag of Ruffles and a can of French Onion Dip.  Pretty cool that they care that much about their patients.

Going back to this past weekend, as we sat in the hotel room Saturday and Sunday we were discussing that this is an example of how absolutely powerful this disease is.  Brain tumors have the power to grow only one centimeter in length and completely alter a child’s quality of life.  We understand how lucky we are that there was an answer to Emma’s issue this time.  There are so many children across the country that don’t have an answer to solve their problems with childhood cancer and brain tumors.  We can’t help but worry.  What would that feel like?

So many people in Nebraska have been willing to help out with our golf tournaments, t-shirt sales, and benefits for kids all across our area, but what could be done if everyone found a cause to put in even more time and effort.  Many of you out there have heard of Sammy’s Superheroes, Team Jack, Seth SO Strong, EmmaStrong, and on and on.  The thing I would ask of you that so diligently follow Emma’s story is to share the experiences of Sammy, Jack, Seth, and an Emma with others.  There are so many people out there that are completely unaware of this disease and the kids that are literally fighting for their lives.  I can’t help to imagine what we as a city, county, state, and even as a nation  could do if everyone found a cause to really dedicate themselves to.  I will be the first one to admit that before this tragedy to my family I did the exact same thing.  But now, especially after this last week I see how quickly things can change.  A girl, that I happen to think is pretty awesome, went from scooting and playing with her brother all over the house to being confined to bed the past two days.  Challenge yourself to find a cause that you feel personal about and make a difference.  We CAN leave this world a better place.

We want to say a special thanks once again to all of our friends, family, and EmmaStrong prayer warriors who sent messages and prayers our way today. Days like these are incredibly hard and all of your prayers and support mean so much to us and help us and Emma through these tough days. Thank You!!!