Emma – February 28th
Click on the pink link above for a video of Emma.

Well I can start by telling you that week 2 of chemotherapy has definitely not gone as planned. All of you already know that we didn’t get chemotherapy on Tuesday but most of you probably don’t know that we didn’t get it on Wednesday or Thursday either. It is now Thursday night and we are sitting in the hospital still not sure what tomorrow has in store for us. I will try to quickly type a summary of the past two days below, apparently I got a little long winded on my last update. Get to the point already Brent. 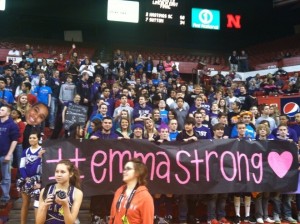 Wednesday, Emma got to come to the hospital with what we were hoping would be a quick visit to the clinic and then right onto the infusion room for the chemo. Instead we made a trip up to see a couple surgeons to see if what they thought of the fluid around the port. We found out that Emma would instead be sent down to the radiology lab to have another dye study done on the port to ensure that they were right the day before. They were afraid that because there was only 5cc’s of fluid put in her port they could have missed something. They also wanted to put it in rather quickly this time to add pressure that would help show any week portions of the port. Shockingly the results came back exactly the same as the previous day. Another reason they wanted to do another dye study was that when they were done they wanted to pull the needle from the port right after they put in the dye so they could see if the fluid coming out of the needle hole was radioactive or not. If it was radioactive we would know that the fluid was coming from the port and the port was defective. That would have been too easy, so of course the fluid that came out had no signs of radioactivity. This left the surgeon stumped so he told us that he was headed to his office to come up with a plan and he would meet with us at 1:00 in his office.

After hanging with Emma for a couple hours in the clinic Kathryn, Emma and I went up to see the doctor and he told us that while he had made up his mind that he was unwilling to allow us to use the port for chemo without him checking it out, he was willing to let us decide the timeline. We could wait to find out what exactly the fluid was that was being flown to Salt Lake City, or we could do the surgery at 4:00 that afternoon. He told us that even if the test says the liquid is spinal fluid he would still do the surgery to make sure the port wasn’t leaking. Kathryn and I decided we wanted to do the surgery right away to make sure that we could get back to the chemo schedule as soon as possible. This surgery proved that the port was indeed working as it should, but he found that the fluid reappeared after he cleared it all out of the area. This told him that it was spinal fluid coming down from the same path as the tube of the shunt. His best guess was that the fluid wasn’t flowing fast enough through the shunt so it found the path of least resistance which was to flow outside the tubing following the same path with an endpoint around the port. He then sent us up to the sixth floor for recovery and fluids over the evening with chemo planned for the morning on Thursday. 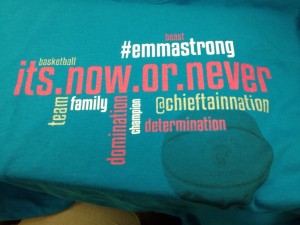 We woke up with a positive outlook towards the day knowing that we knew the port works and we should be able to finally get the chemo we had been trying to get for a couple days now. The morning started by being told that they were still waiting on orders to administer the chemotherapy. Emma looked good and was in relatively good spirits. She was a little more tired than normal and a in a little bit of pain but I attributed that to the surgery from the previous day.

We had a little scare in the morning when I felt a sudden warmth on my shirt. I stood up thinking it was probably her diaper I hadn’t changed her in while. But I was shocked when I looked down and saw a large spot of blood on my t-shirt. Of course I assumed the entire circle was blood but was quickly informed by the nurse that the majority of it was fluid from the port. The cap on one of the connectors to the tube inserted in her port had come off and the fluids had come out of there. This turned into quite the debacle when the needle was taken out about 10 minutes of fluids poured out of the hole left by the needle. Of course because the nurses on the sixth floor had never seen such a thing they were concerned right away. We tried to explain to them that this was normal for Emma, but I’m not sure they believed us.

Because of all of the fluids the doctors and nurses were concerned that the strips holding the surgical cut shut could come off. This caused quite a few conversations to be help between staff outside of the door. I think I may encourage them to have all discussions in my presence so that I don’t have to listen so hard through the door. It’s more difficult then you would think. Eventually the fluid stopped coming out and they were able clean the area and get a new tube inserted into the port. Throughout the afternoon we had visits from neurosurgeons, oncologists, general surgeons and many different nurses. All of these wonderful people were confused as to what exactly was happening at this point. The afternoon was interesting with the nurse first increasing fluids to prepare for chemo then coming in minutes later to tell us that the plans changed. They then came back in and increased the fluids again to prepare only to turn it back down minutes later. It was quite an interesting experience for an hour or so not knowing what was going on.

Dr. Bowdino eventually finished his surgeries for the day and was able to come see Emma. He informed us that the fluid could be from two different options. He said that the pressure could be high enough in the brain that they fluids want to drain faster then the shunt was allowing it to flow through. This could be causing the fluid to squeeze through the area surrounding the shunt and flowing down the channel left by the tubing and eventually settling in the area surrounding the port. The evidence that he can see at this point tells him that there isn’t enough pressure in the brain to cause this to happen but it was a possibility. The second thought that he has was that there was a small cut in the tubing around the area of the neck. This hole was giving the fluid a quicker and easier exit into the area around the port instead of flowing into the stomach area. If this was the case he would very soon need to go in and do a revision on the tubing for the shunt. Sound familiar to anyone yet??

The thing that was going to determine which of these two options were correct was going to be to change the increase the rate of fluid flowing through the shunt. This is easily done by using a tool that involves using a magnet. Interesting to watch to say the least. The telling fact as to what the problem is will be the amount of swelling surrounding the port in the morning. If the swelling increases that means that by having more fluid flow through the shunt more fluid escaped through an imperfection in the tubing. If the swelling decreases surrounding the port this would prove that the fluid escaping around the shunt decreased because more of the fluid went through the tube and less got out. He also told us that this issue would need to be addressed soon because it would most definitely lead to an infection. Need to avoid that big time.

Emma also dealt with some pain and discomfort from a little constipation but that has been cleared up in the past few hours after a little help from the nurses. She is now sleeping very soundly in the crib and should do fairly well throughout the night. God willing.

As if this all wasn’t enough our son Aiden, age 3 1/2, also was diagnosed with strep throat this afternoon. While we are still extremely strong in our faith and trust in God. I am starting to wonder if he is confused on how much we can actually handle at once. This is getting a little out of control. We really wouldn’t have been able to get through this week without the help from both of our parents. Even though he was extremely sick in the doctors office today Aiden still said that “he needed to stay 3 so he can help take care of his baby sister, Emma.” We could really use a break from all the drama so please pray for a little stability in our lives at this time. God Bless and give all of your loved ones a little more love this weekend for us. Happy Birthday Alyssa!! We love you to the moon and back. Sorry we can’t be at your party this weekend. Save Uncle Brent some cake.