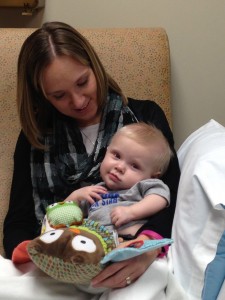 Getting Chemo the first time.

It has been quite the interesting week.  For those of you who are looking for the short version we have spent around 17 hours in clinics with Emma getting poked and prodded the majority of the time.  We are all home and doing well today and look forward to the extended weekend ahead of us.

Tuesday started really early for Steve Gehring this week as he made it from Columbus to Papillion by 8:00 a.m. in order to watch Aiden for me as mom went to work and I took Emma to her first chemo appointment.  We again want everyone to know that there is no way that we could have made it this far without the constant support and flexibility from our parents and family.  I am fairly confident that Kathryn definitely got the short end of the stick on Tuesday.  I have no idea how she got anything done throughout the day having no idea what the process would be like.  I did my best to update everyone in the family all day long with short texts and pictures.  Life in the chemo wing would be extremely boring without technology.

The day began checking in on the first floor of the Specialty Pediatric Clinic at Children’s Hospital.  Shortly after giving a little information at the desk Emma and I were whisked away to the amazing care provided by Dr. Abromowitch and Anisa.  We started with getting a temp and weight, Emma is up to 17 lbs.  Yay!!  We then got to experience what it was like to actually put the Port into action.  Because of the fact that her surgeon cuts aren’t fully healed Emma isn’t able to use the numbing creme to help with the initial pain of putting the needle in.  She didn’t enjoy this but seemed to get over the pain fairly quickly, shortly after administering the needle they drew blood in order to get her initial blood counts to make sure she was healthy enough to receive the chemo.  Everything came back looking good and we were ushered down the hallway to the infusion area of the hospital.  The plan was to have Emma receive two hours of fluids prior to the chemo in order to protect Emma’s kidneys, since the drugs being used can be harmful.  Just as Emma has done throughout this process, saturating her diaper took longer to occur then planned.  Since she hadn’t had a really wet diaper yet they added on a third hour of fluids before the medicine was administered.  Due to the delay Kathryn was able to get up to the hospital before chemo even started.  Yes for those of you keeping track, Emma and I were at Children’s at 9:45 a.m. and Kathryn was off of work before she even got the chemo.

We were taken from the lobby area where the fluids were administered to a separate room to receive the medicine. Honestly, you couldn’t even tell the difference in Emma from the fluids to the medicine but I know that her body could.  The first medicine only took a matter of minutes to administer but the second med takes 1 hr and 5 min. to give.  Once this was complete they put 25 more minutes of fluids into Emma before saying we were done.  One other source of concern came when the needle was pulled out of the port.  A small amount of clear to yellow liquid squirted out of the needle hole as it was pulled out.  It wasn’t a lot of fluid but enough to be noticed and the nurse said that they had never seen that happen before.  Weird, we hear that all the time.  Dr. Abromowitch was made aware of what happened and she seemed to think it was something to watch but wasn’t overly concerning.  With that we started to go on our way home.

The only thing we had left to achieve before getting to send Steve on his way was to get her medicine necessary to get through the next few days.  Shockingly our Walgreens didn’t have all three of the medicines needed so we would need to make two stops.  Lets just say this turned in to quite the debacle.  Ending with me being unable to set up a QuickPay option with Emma’s checking account, that would have been way to handy.

Emma made it through the evening without any complications or any signs of nausea or pain.  Wednesday I woke to Emma refusing to take a bottle and having a 99.8° temperature.  Not exactly what I was hoping for.  We had been told to call in immediately if Emma had a temp over 100.4°, refuses to eat, or has fluids coming through previous cuts.  I left a message for the doctors and went on my way.  An hour later, I was able to get just about four ounces down but her temp had risen to 100.8°.  This led to a second call which was responded to almost immediately, Emma and I were told to head to children’s.  The problem with this was that I had Aiden in the bath and no one to watch him as daycare was closed for the week.  Speaking of which, the Gehring family sends their prayers to the Loncrier family and hope they have had nothing but good news throughout their week.  I quickly got the two kids ready for the trip and got a bag together hoping that I had enough stuff to get the kids through an hour or two of checks.

We walked right into the same room we were in roughly 24 hours earlier.  They said they would have to draw blood to do tests and look at everything all over again.  When the needle was inserted to the port the blood shot into the tubing without even being pulled out, something I was told wasn’t normal. We sat in the room for about an hour or two waiting for results with different doctors coming in to look at Emma, her port, as well as her shunt.  I insisted that we also perform tests on the fluid in the shunt just to make sure that there weren’t any issues in the brain.  Luckily all of these tests came back positive without any issues that jumped out at them.  The only thing that they could find was that there was some increased puffiness around and above the port in her chest.  One doctor even came in and told me that we will just have to watch it and see if it “gets better or worse.”  Needless to say that wasn’t a good enough answer for me so I kept searching for answers.  Finally Anisa suggested that we do a dye test to make sure that the port was operating in the fashion it was supposed to and make sure there wasn’t any leaking coming from the port.  It would only take add an hour onto the stay and we had already been there about 5 hours anyways.

I cannot even begin to say enough positive things about the nurses throughout this time period.  Aiden really struggled when he watched Emma scream as the needle was put into her port and they drew blood for the tests.  I think it took him about twice as long to calm down then it did Emma, but then again it was probably something that no three year old should ever have to witness.  I know I wish I hadn’t seen it.  The nurses took the time to get toys for Aiden, rocked Emma for 30 minutes as Aiden and I went and ate in front of the ball machine, and got Aiden a Mickey Mouse blanket and stuffed animal to hold while he watched Nemo.  I think we are going to develop a strong love for the nurses in this hospital.

Even after all the tests and nothing but positive results we were flabbergasted as to what was causing the swelling around the port.  No one seemed to have the answer that we were wanting.  Again Kathryn got to come up during the last portion of the visit.  She was there when we finally pulled out the port and about 10 times as much fluid soaked the examination table.  It came out in the same manner as the day before but this time there was enough fluid to soak the paper the size of Emma’s back.  This started to increase our concern level even more than before.  We were sent home without any answers just things to look for: leaking from wounds, redness around the port, and temperature.  Emma had a decent evening but we did find some relief when Kristi came over to look at the port and her brother-in-law shared some tips about his experiences with ports as a general surgeon.

Two snow days and one more short doctor visit to look at the port again summarized the rest of the week.  Keep the comments and prayers coming our lives our a constant mess and our loved ones help us get through it.

Special thanks to Haley Reese, Genise Bald, and Carol Weeder for volunteering their time to help watch Emma for the remainder of the school year.  May God Bless each and everyone one of you.  We will be in touch with all three of you tomorrow to let you know what to expect from the upcoming week.

If anyone wants proof that God is still watching over us: these snow days and Emma’s great day today has was much needed to end this week.  Love you all.

Not sure if I did it right but I think I added new pics tonight as well.